Lotus was born from innovation but has spent most of its recent history in stagnation. Founder Colin Chapman transformed Formula 1 and other top-flight motorsport series and sold clever, lightweight road cars. With the launch of the Esprit in 1976—the second most famous automotive wedge after the Lamborghini Countach—the British company also became an early pioneer of the mid-engine sports car.

But after Chapman's death in 1982, Lotus's fortunes declined. The company passed between frequently cash-strapped owners, development funds were in short supply, and its history over the last quarter-century can be dispatched in a couple of sentences. The novel bonded-aluminum-frame Elise was launched in 1996, the larger and supposedly more practical Evora came out in 2010, and grandiose plans to subsequently launch five new models collapsed with the acrimonious departure of CEO Dany Bahar in 2012, leaving the existing model range to soldier on. The Evora continued to sell in ever-smaller numbers until it retired last year. 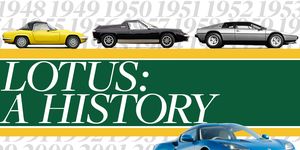 Now there is an all-new Lotus sports car, the last model the company will launch before it switches to all-electric powertrains. The Emira has been developed using a substantial cash injection from Chinese automaker Geely, which took control of Lotus in 2017. It will be going on sale later this year with buyers able to choose between a Toyota-sourced supercharged 3.5-liter V-6 and—shortly afterward—a turbocharged 2.0-liter inline-four from AMG. Before then, we got the chance to drive a V-6-powered prototype on the track at Lotus's Hethel factory in Norfolk, England.

Though the car we drove looked far tidier than the sort of scruffy, disguise-clad test mules used in early development, it was still in pre-production spec. According to Gavan Kershaw, Lotus's director of attributes, it was a VP2-level prototype that had been borrowed from the pool of cars being used to test driver-assistance systems ahead of the Emira's official launch. The supercharged V-6, familiar from the Evora, makes 400 horsepower and 310 pound-feet of torque (Emiras equipped with the six-speed automatic are treated to 317 pound-feet); our car had the standard six-speed manual gearbox and mechanical limited-slip differential. It was also riding on what will be the softer Tour suspension and Goodyear Eagle F1 tires rather than the track-biased Michelin Pilot Sport Cup 2s that will be offered as an option.

The Emira looks great in the flesh, its sleek styling and the sizable air intake apertures behind its doors making it appear more like a junior supercar than a sports car. Beyond the stickers proclaiming it a prototype, there were few clues the car we drove was short of production spec. Some of the interior plastics didn't have an embossed-grain finish, there were a couple of well-hidden emergency shutdown buttons, and the Track Dynamic mode didn't work. But the sense of quality was still impressive, especially compared to the crudely finished cabin of the Evora. The Emira is built using an adhesive-bonded aluminum structure—the same technique Lotus has used since the Elise—but ingress and egress have been greatly improved thanks to narrower sills and deeper door apertures.

Despite its pre-build plastics, the Emira's interior also impressed, with soft facings on the doors and dashboard and good ergonomics. Many parts have come from elsewhere in the group—the turn-signal and wiper stalks are obviously Volvo sourced—but the digital dashboard and central touchscreen are crisply rendered with bespoke graphics. The driving position is good, with plentiful adjustment and decent headroom, and looking out through the windshield, the tops of the fenders are visible to help position the car. Whereas the Evora was designed to be a 2+2, the Emira is strictly a two-seater, although there is room to squeeze soft-sided luggage between the seatbacks and the rear firewall.

Our drive at Hethel took place in the appropriately English medium of gale-force winds and driving rain, but the Emira was happy to show its talents on the wet surface of the 2.2-mile test track. The supercharged V-6 is quieter at low revs than it was in the Evora, as a switchable exhaust valve keeps it muted in the default Tour driving mode, but either selecting Sport mode or taking the engine past 4000 rpm switches to the louder setting and helps the car find its voice. As before, the V-6 isn't a particularly high-revver with its redline set at just 6800 rpm, but it feels muscular throughout the range and delivers lag-free responses.

We live in a crazy world where the combination of 400 horsepower and a claimed 3152-pound curb weight makes for a power-to-weight ratio well short of the most muscular supercars (the new Ferrari 296GTB has one nearly twice as potent). But the greasy circuit quickly proves the Emira has more than enough power to make for a compelling driving experience, especially given the car's near-total lack of adaptive or active systems.

Lotus's commitment to dynamic purity has it using hydraulically assisted power steering for the Emira. The V-6 uses an engine-driven power-steering pump, but the inability of the AMG engine to accommodate such an anachronism means it will use electrohydraulic assistance with an electric pump. It only takes a few corners to vindicate Lotus's decision to stick with the analog technology. The Emira's steering features the same combination of precision and feedback we remember being one of the Evora's highlights, with slower off-center responses than are normal in this generally darty segment but with seemingly perfect proportionality behind it. The Lotus's all-passive suspension is similarly gentle, with discernible roll under harder cornering loads but well-damped compliance over the Hethel track's curbing and through aggressive directional changes. Grip levels are impressive too—the prototype's dashboard display reporting peak lateral-acceleration figures of over 1.0 g in wet conditions.

Despite the lack of active systems, the Dynamic mode did noticeably alter the character of the car. In Tour mode, throttle response is mellower, and the prototype's stability-control system could be felt working to quell both understeer and oversteer. Sport is more liberal, allowing a modest dose of rear-end slip under power. But, in the absence of the nonfunctional Track mode, turning the ESC fully off delivered the revelation that the Emira feels far friendlier when pushed beyond its natural limits than many performance cars do behind a battery of driver-flattering active modes. It proved to be easily driftable in the wet conditions too.

But you don't need to be on the ragged edge for the Emira to feel special. On first acquaintance, it has all the virtues of a mid-engine layout but seemingly none of the vices. It's keen to change direction, and with the mass of the V-6 giving an impressive throttle adjustability, it does so without any sense of snappiness upon sudden throttle lift and with a high tolerance for combined braking and turning inputs.

Don't worry, it wasn't perfect. The Emira's gearshift had a better weight and feel than the loose shifter of the Evora, but the linkage often seemed to snag on changes across the planes of the box, especially the shift from second to third. It also doesn't have any kind of automated rev matching in any of its modes, an omission that indicates how seriously Lotus wants owners to take the business of driving it. That, or opt for the automatic version.

The Emira is very much a Lotus, but a different one. The driving experience remains exemplary, something common to pretty much all its predecessors. But it also looks set to deliver the usability that the company's earlier cars rarely gave much concern to. Given that Lotus is hoping to build up to 4500 a year—more than twice the combined annual totals of Evora, Exige, and Elise during the last decade—a broader appeal is both necessary and understandable. We need to wait to see how the Emira copes with the real world, but our first impression is overwhelmingly positive.

Lotus has confirmed pricing for the fully loaded First Edition Emira V-6: $96,100, with U.S. deliveries beginning later this year. It has also said the base AMG-powered car will be available in 2023 at a $77,100 starting price.