Automakers often invite us to drive prototype versions of future models, but we are reluctant to accept these offers. A review of an unfinished car is, necessarily, unfinished—especially as we are inevitably told that anything we don't like is certain to be changed before the formal launch.

But there was no chance we'd say no to this one, even though it's a pre-production vehicle that won't reach our shores for two years and a European version that's quite a bit different from the U.S. model. Because beneath the psychedelic wrap disguise is the new Volkswagen bus we've been waiting for since the retirement of the Vanagon in 1991.

Volkswagen dropped several hints about bringing the bus back in those intervening years, including the Microbus concept at the 2001 Detroit auto show. But it was the ID.Buzz shown at Detroit in 2017 that presaged the production version, an EV microbus that will sit on the same modular EV platform (MEB) that underpins the Volkswagen ID.4 and Audi Q4 e-tron. 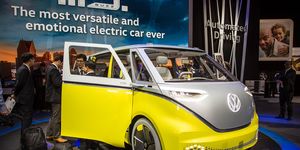 The Europe-spec prototype was only partially representative of the bus that will come to the States. It was a commercial van rather than a people hauler, with a bulkhead behind the front seats fully partitioning the cargo area; all of ours will be passenger versions. It also sat on the shorter 117.6-inch wheelbase that will be offered in Europe, while the plan is to bring only the longer-wheelbase variant to America. The U.S. version will also have a bigger battery pack than the prototype's 77.0-kWh unit.

Don't worry, excited anticipation is still justified. The drive started at Volkswagen Group's U.K. headquarters in Milton Keynes, an English town constructed in the 1970s on formerly green fields. It has a grid street layout designed by a Berkeley-based urban planner with roundabouts at each intersection (a very English touch). It's a great place to learn about understeer or, in this case, the ID.Buzz's impressive resistance to it.

One We Won't Get
Here's Why the ID.Buzz Cargo Is Not Coming Here

The ID.Buzz's MEB architecture means that much is familiar, although the Buzz's shape and interior dimensions prove how adaptable an architecture is when there's no need to accommodate a bulky upright engine. The battery pack's depth has an obvious effect on the height of the floor, but otherwise the vehicle feels impressively roomy, translating a high percentage of its 185.5-inch length into interior space. We're told that U.S.-spec versions will all have three rows of seats.

The prototype used what will be the entry-level powertrain consisting of a single electric motor driving the rear wheels—the Vanagon would be pleased that its successor stuck with the same driven wheels. Like the ID.4, it makes 201 horsepower and 229 pound-feet of torque. Volkswagen engineers say an all-wheel-drive version using a second motor to power the front axle will also be offered. Beyond basic dimensions, few details have been released, although we’re told that all versions of the ID.Buzz will have a top speed limited to 90 mph. The the short-wheelbase variant has an impressively agile turning radius of just over 35 feet.

Despite the modest-for-an-EV powertrain specs, the ID.Buzz is quicker and keener than its air-cooled ancestors, stepping briskly off the line with gentle throttle inputs. It is no rocket ship; we’d guesstimate a 60-mph time under nine seconds. Acceleration tails off as speed builds, and an exploratory run to the 90-mph limit confirmed that it takes a long time to arrive. At a 75-mph cruise, though, the ID.Buzz felt entirely happy—something nobody ever said of the Vanagon or its predecessors.

While few ID.Buzz buyers will be expecting sports-car athleticism, the prototype's chassis behaved well when pushed. Even in tight, greasy corners, there were few clues to the rear-motor, rear-drive layout, with the stability control intervening invisibly to regain lost traction. Nor was the front end quick to surrender grip, sticking determinedly to a chosen line despite the winter tires VW fitted for our drive.

While the powertrain's near silence wasn't surprising, the continued quiet as speeds rose was unexpected. Panel vans are rarely quiet companions given their size and lack of sound insulation, but even in its cargo configuration, the ID.Buzz stayed hushed with only slight wind noise disturbing the peace during cruising. Ride quality also impressed considering the commercial-grade underpinnings, although there was a slight floatiness over bigger undulations that would probably be calmed with some payload aboard. The prototype's 18-inch wheels, the smallest available, likely helped the ride quality. Volkswagen says sizes up to 21 inches will be offered.

There isn't much to say about the Buzz's interior yet, as the prototype's dashboard and door panels were largely disguised. We could see that it has the same user interface as the ID.4 with the combination of a dashboard touchscreen and a smaller display behind the steering wheel. Sadly, it also features the same highly sensitive HVAC controls, positioned so they are easy to inadvertently activate when using the central display.

Yet there are many clever functions working unobtrusively. What initially felt like inconsistent regenerative braking turned out to be the ID.Buzz varying the level to adapt speed for approaching restrictions or intersections. We're also promised that the finished car will support forthcoming Plug & Charge technology, which will allow cars to communicate directly with chargers to eliminate the need for cards or apps. We don't have official range figures yet, but the engineering team says they would be happy with a 250-mile rating under the European WLTP testing protocol, a distance the larger battery pack should be able to deliver under the tougher EPA standard. We haven’t been given a peak charging speed either but are assured that rapid DC charging will be supported (the ID.4 supports rates of up to 125 kilowatts).

The original Volkswagen bus's hippie cred makes the new one a deserving recipient of an EV powertrain; there will never be a combustion version. VW did attempt to electrify the original, creating a one-off concept back in 1972 that fitted a Type 2 panel van with 21.6 kWh of lead-acid batteries, which filled most of the cargo area and powered a 42-hp motor. It had a top speed of 46 mph, unacceptably slow even by the lesser standards of that era. That one didn't deserve to make production, but the ID.Buzz undoubtedly does. We're keenly looking forward to the finished version.